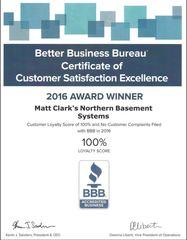 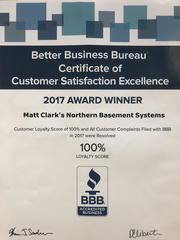 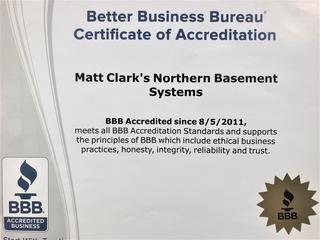 Click the icons to see what our customers had to say.

We not only adhere to the highest industry standards, we strive to be the industry leader in the home improvement and basement repair related services we provide. We also use state-of-the-art products and technology which are designed to fix your home. We are the authorized Basement Systems and Foundation Supportworks dealer in Merrimack, NH.

Services we offer in Merrimack:

In Franklin, New Hampshire, a homeowner was going through the process of finishing off the basement of the home.  The homeowner knew one major issue needed attention before any of the finished work could begin.  A large amount of water would creep into the basement when it rained and continued to seep in days after.

Being in the construction business, the homeowner knew exactly with whom they would hire to turn the wet, nasty basement into a dry, healthy, useable space.  A phone call was made to the basement waterproofing experts at Matt Clark's Northern Basement Systems to set up a free estimate.

A system design technician did a thorough inspection of the basement, addressed where the water was entering and designed a custom system to make sure the basement would stay dry, even during a heavy rainstorm.

A team of highly trained and certified professional installers started installing the custom system.  First, the perimeter of the basement is jack-hammered, and a trench is dug for the placement of water guard drainage.

Next, a full perimeter drainage system is set in place and surrounded by crushed stone.

After the water guard drainage system has been installed, it is tied into a Triple Safe Sump Pump.  The Triple Safe has three separate pumps, the primary, a cast-iron Zoeller ⅓ horsepower sump pump set at the lowest level. The second, more powerful Zoeller ½ hp pump set a bit higher in the liner and will handle extra water and serve as a backup.  The third pump will turn on in the case of a power outage; our UltraSump battery backup sump pump will pump 11,500 gallons or more on a fully charged battery.

The Triple Safe will pump out the water via a discharge line that will go through an Ice Guard System and send the water away from the foundation of the home.

To finalize the custom waterproofing design, a state-of-the-art Sedona SaniDry dehumidifier was added to the system.  This will make sure the basement of the home maintains a perfect 55% humidity and is an EnergyStar product.

The owner of the home now can move forward with finishing the basement of the home.

We checked up with the homeowner a few weeks later to see how his finish work was going and being the experienced carpenter he is, a very cool cabinet was constructed to house the Triple Safe sump pump.

Looking to put their home on the market, a family in Contoocook, New Hampshire, called Matt Clark's Northern Basement Systems, after a reference from their real estate agent.  The real estate agent had seen previously sold homes with similar wet basement issues and had clients that worked with Northern Basement Systems to accomplish a dry basement.

After a free estimate, a custom-designed waterproofing plan, using patent waterproofing products, was installed, ensuring the home's basement will remain dry.  The house is now ready to hit the market and for new owners to enjoy years of a clean, dry useable space.

In Henniker, New Hampshire, a customer who inherited this home recently had done their first walk-through of the house with a general contractor.  With already owning a home, the original owner's priority was to fix the house up and sell it.  The general contractor took the new owner throughout the entire building, pointing out things that would need to be fixed before the house could be listed on the market.

One of the contractor's major issues was a large amount of water entering the basement.  He pointed out different watermarks on the basement walls, indicating high water levels throughout the home's history.  Fortunately for this homeowner, the hired general contractor had worked with Matt Clark's Northern Basement Systems in the past.

With a great recommendation from the general contractor, it was easy for the homeowner to move forward with a proposed custom-designed waterproofing system from Matt Clark's Northern Basement Systems.  The custom-designed waterproofing system will ensure the basement will remain dry for years to come and make it an easy sale for their real estate agent.

In Newbury, New Hampshire, a family who had dwelled at their current residence for the better part of the last decade had finally decided to make a big change.

For the last few years, an awful smell has constantly been omitted from the home's crawlspace.  The smell was very off-putting, but when a family friend informed them of potential health risks, they knew it was a must to have someone figure out how to make it stop.

When crawl space air moves upward, it can also carry mold spores or toxins that off-gas from building materials or contaminated soil. These can attack your respiratory system or cause other health problems.

Luckily for the family, the same friend who advised them of the potential health hazards of their crawlspace also had a company repair the crawlspace of his camp a few years ago and was amazed at the change it did to the crawlspace and overall smell of the camp.

In Bow, New Hampshire, Suzan C had water entering the basement of her home just about every time it rained.  She was more than frustrated because she had recently hired a local handyman to solve the problem.  He promised her, verbally, the water would not come back after he painted the basement with a waterproof application. Unfortunately, this was the third time the rain had penetrated her basement since being treated with the application.  The handyman wasn't returning her calls, and while Suzan stood at the bottom of her basement stairs, starring at a wet floor, she decided to seek help elsewhere.

After doing a lot of research and being recommended by a local water restoration business, Suzan contacted Matt Clark's Northern Basement Systems.  Northern Basement Systems performed a free inspection of the basement and then went over step-by-step the process and overview of the custom-designed waterproofing plan proposed by the System Design Technician. In addition, the technician explained why the waterproofing application wasn't working and how a complete perimeter waterproofing system, paired with a TripleSafe Sump Pump will guarantee a dry basement.

Suzan absolutely loved the proposal and moved forward with the proposed waterproofing system to make her basement dry for years to come.

Shortly after the waterproofing system was installed, the system was put to the test with multiple days of heavy rain.  Suzan was more than happy to call and let the office know how pleased and grateful she was to find an honest company whose system works.